The Frasers in the New World

A series of weak chiefs, combined with premature chiefly deaths that left child heirs to the chieftainship. These boy chiefs came under the influence of their mother’s people.

It was normal for clans to form marital alliances. The daughters of ambitious, neighbouring clans married Fraser chiefs, and vice versa. But, if the chief died young, leaving only a boy heir, what should happen, is that the brothers and cousins of the late chief should assume the guardianship of the heir to raise him in the ethos, culture and history of his clan. And these men too were the natural managers of the clan’s territories and assets.

However, in the second half of the 17th century, on the death of their Lovat husbands, the widowed Lady Lovats brought in brothers and uncles from their own clan – particularly the Mackenzies and Atholl Murrays – to help them while the young Lord Lovat grew up. This created a clash of interest – for whose benefit did they run the Fraser clan? With everything alienated to the care of an ambitious neighbouring kin, the neighbouring kin started to appropriate what is not theirs. This had been happening to clan Fraser of Lovat for several generations until 1696. As a result, weakness had come to erode the standing of Clan Fraser of Lovat in the Highlands.

Only Simon Fraser, Lovat of the ’45, was strong and ambitious enough to stop the Fraser of Lovat slide to oblivion. There is a whole post devoted to the Old Fox, as he is so important in Fraser history and the history of the Jacobite cause. But, after achieving so much, he raised the clan for Bonnie Prince Charlie at Culloden. He was captured, taken to London, condemned by his fellow peers, and was the last nobleman in Britain to be beheaded. The Lovat Estates fell forfeit to the Crown, their assets used to support British troops during the military occupation of the Highlands.

Frasers in the new World

Fifteen years later, the Old Fox’s son, another Simon Fraser, was determined to work the Fraser’s passage back into government favour. The Anglo-French wars in North America offered him his chance. Simon raised a regiment of 800, and was commissioned as lieutenant-colonel. The regiment was first called the 78th regiment of foot, but soon renamed the 78th Fraser Highlanders.

‘The uniform of the regiment was the full Highland dress, with musket and broadsword… and a sporran of badger’s or otter’s skin. An eagle’s or hawk’s feather was worn in their bonnets by the officers, while the soldiers ornamented theirs’ with a bunch of the distinguishing mark of the clan or district to which they severally belonged.’ 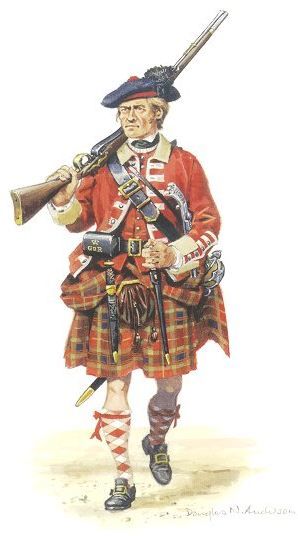 Ordered to North America with 15 Fraser Officers they distinguished themselves first at the Battle of Louisbourg in 1758. They then fought with great distinction and played a key role in the battle for Quebec, on the Heights of Abraham.  It is there that they are supposed to have made the last great Highland charge – firing two salvoes of muskets, before dropping their guns and rushing on the French with their Claymores.  Tragically, Wolfe died on the battlefield at the moment of victory.  The scene is captured in a famous painting by Benjamin West, showing Simon Fraser in Fraser tartan worn by the 78th despite not being at the battle himself. It was especially poignant since Wolfe, as a young English Officer, had to be smuggled out of Scotland for refusing to participate in the slaughter of Highlanders after Culloden. Finally, the regiment helped to capture Montreal in 1760. 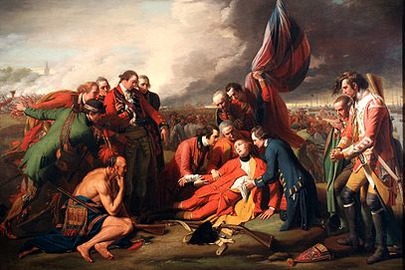 After a brief interlude, the Regiment was reformed as the “71st Regiment Fraser Highlanders” to fight in the American Wars of Independence, where again they distinguished themselves.  At one point in the conflict they had to reach the besieged town of Savannah, Georgia, but were caught between American armies on land and a French fleet at sea.  They successfully evaded capture by using Indian guides to navigate the swamps, marching up to their chests in water and reached the town in time to repel the combined enemy attacks.  Their commanding officer, John Maitland (a forbear of my wife’s family), is celebrated in the Museum of the US Marine Corps, on Parris Island, as one of the founders of the Marine tradition in the USA.

A third volunteer regiment, the “Fraser Fencibles”, was founded in 1794 by the ageing Archibald Fraser (last surviving son of “The Fox”), as part of a new system of domestic Scots Militia. He appointed James Fraser of Belladrum to raise them, but his son Simon commanded them in the 1798 Irish Rebellion, where they acquitted themselves well.

All this helped Simon Fraser to gain a seat in the UK parliament and to be restored to the hereditary estates of Lovat in 1774. he was raised to the rank of Brigadier General. In 1778, he became a proud founder member of the Highland Society of London. The Highland Society members wanted to ‘promote the Interests of the Highlands’. They concentrated on obtaining a repeal of the ban on Highland dress, and celebrating the Gaelic language, music and literature. They sought to revive the region by establishing schools, improving agriculture, and providing relief to distressed Highlanders, and generally ‘keeping up the Martial Spirit; and rewarding the gallant achievements of the Highland Corps’.