Each clan has numerous versions of its tartan which can make it very confusing for those not accustomed to how it works.

Normally it starts with two main categories, Dress which are mostly reds based, and Hunting which are mostly green and browns for camouflage. Most clans also have an Ancient and a Modern version of both. The most commonly used Fraser tartans in our experience are as follows:

Then most major branches of the clan, through the centuries, evolved their own variants on both the colours and the check. This still goes on today, with people introducing new Fraser tartans irregularly. Moreover, each mill that makes Fraser tartan might use slightly different colors so almost every kilt will be nuanced and subtly unique, especially the older ones which will have weathered.

What does the Chief wear?

Below is a picture of Lord Lovat, his uncle the Hon Kim Fraser, and first cousins. For the most part they are wearing the Modern Fraser Dress tartan. NB the green kilt is not Fraser but Mackay. Shimi Lovat’s daughter Tessa married the chief of the Clan Mackay, Lord Reay, and that is his second son Edward in the photo. 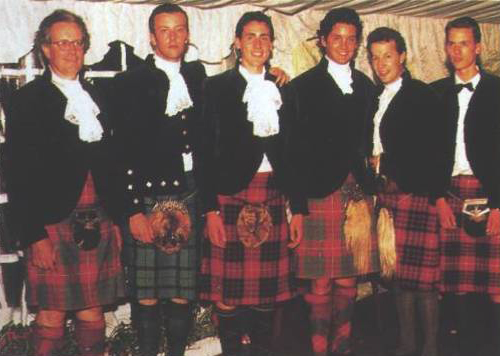 An organised system cannot exist without organised communities and uniform tartans require both technology to make them and mass-production to encourage them; they are therefore unlikely to have come into being until weaving had become a specialised trade in its own right. It is doubtful if even the wizardry of Sir Walter could have conjured up the complete Clan Tartan System and all that goes with it, more or less overnight and, while Queen Victoria did a great deal towards founding the romantic reputation of the Highlands – which still endures – it has to be said that the beginning of the Clan Tartan Idea came before her time.

It has to be remembered that, in the present context, tartan is Highland and that the Lowlands did not adopt it in the ‘family’ sense, to any large extent, until the mid-eighteenth century, when the Lowland tartan industry had begun to grow up as a result of the 1747 Act which sought to abolish tartan altogether. My recent research into military tartans suggests strongly that the blue, black and green tartans owe their existence to military fashion or even War Department ruling: this is not to say that all such tartans are military ones but that the army started the idea. The other class of dark tartans, those known as ‘hunting’, almost certainly derive jointly from a rather obscure statement by George Buchanan (see the right hand column) and the strident colours of the early synthetic dyes. A third class, many-hued, comprises the Sobieski confections, which are either inventions or minor modifications of established tartans of their time.

Laying these three classes aside as being late, standing out from what remain are three variations on a theme in red, green and dark blue, each with its own geographical affinity. Naming them by the clans who use the simplest versions, they are, in the West the Macdonald type which has a broad green stripe with a narrower blue one on each side, in the central Highlands, running from Strathglass in the north well into Perthshire, the Mackintosh type in which green stripe is divided by a wide central red stripe, and north of the Great Glen the Ross type in which the green and blue elements are in separate blocks.
However, there are some exceptions: Stuarts of Appin and MacDonells of Keppoch are associated with tartans of the Mackintosh type; the now-forgotten MacPherson of Cluny’s tartan, listed by Wilsons’before the end of the 18th century, Loch Eil Tartan, another early listing by Wilsons’, which I think was probably worn by Locheil’s men in The ’45, and one associated with the Fraser contingent at Culloden, giving a distinctly Jacobite undertone to the pattern.

The Jacobite Army in The ’45 was organised in Clan regiments and in such a long and mobile campaign some re-equipment must have been necessary so, however the men may have been dressed at the outset, it is probable that a considerable degree of uniformity must have ensued which resulted in clan regiments eventually wearing uniform tartans that became Clan Tartans by a natural process. Whatever inferences enthusiastic protagonists may draw from the totally inadequate evidence, there is no clear reference to the use of tartan in the ‘clan’ context before The’ 45 and the Clan Tartan Idea made rapid progress very soon after. There seems to be a strong probability that the Clan tartans are a direct legacy of the last Jacobite Rising.

When large numbers of prisoners were taken, groups of them wearing the same tartan and the individual groups wearing recognisably similar tartans it would have been hard for the responsible Government authorities to avoid seeing in tartan a badge of underground armies. A ban on tartan in disaffected areas would be a natural outcome and can be seen as a precaution against a future outbreak rather than as some kind of punishment or a deliberate attempt to destroy the people.