By the late 1630s, Scotland, including the Highland clans, was embroiled in a series of brutal Civil Wars . Divided, very roughly speaking, along religious lines, the clans lined up for King Charles I and the established church Royalists; or behind various parliamentarian and Covenanting, low church, puritan minded, factions.

At the Battle of Auldearn in 1645, many Frasers opposed the charismatic royalist leader, the Marquess of Montrose. But not all. A poem on the battle gives a sense of the particular horror of civil conflict that sets families and clans against each other.

A Bold a Bold, and Lieth’s by Lieth overthrown.

A Forbes against a Forbes and her doeth stand,

Oh! Scotland, were thou Mad? Of thine own native gore,

So Much till now thou never shedst before.’

But by 1689, the Frasers were united behind the deposed and exiled Catholic Stuart monarch, King James II. With his flight from the throne, Jacobitism (from Jacobus, Latin for ‘James)’ was born.

The Scottish Parliament voted in favour of accepting the invading Dutchman William of Orange and Queen Mary as rulers of Scotland. Mary was James II’s daughter, and a Protestant. But many clans, while disliking James II’s Catholicism, believed him to be the rightful, anointed ruler. ‘Bonnie’ Dundee (John Graham of Claverhouse, 1st Viscount Dundee) rallied the supporters of the Stuart king, raised the royal Stuart standard.

The Fraser chief, Lord Hugh Fraser of Lovat, tried to prevent his clan rising for the exiled king, but failed. A weak chief, Hugh’s leading men deserted him. The heir to the second branch of the ruling family, Alexander Fraser of Beaufort marched a force of Fraser fighting men and put them under Dundee at the Battle of Killiecrankie. 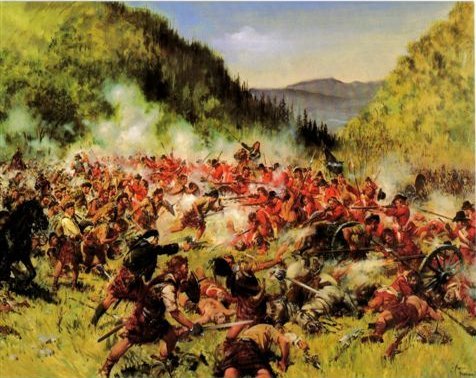 The Jacobites – The Battle of Killiecrankie

This weakness at the top of the clan had become a real problem. The fact is, that by the late 1600s, Clan Fraser of Lovat was going under. We would have been swallowed up by powerful, predatory neighbours and in-laws.

Except, one man rose to the top of the clan family. He is the chief who went on to become Scotland’s most notorious clan chief, rebel and double agent: Simon Fraser, Lord Lovat of the ’45.